Taking care of mental health while kicking ass as a creative is hard af. That’s why I’m here with weekly motivation and tips through my newsletter. Start the week off right with Motivations for the Anxious Creative.

Things with my brain are starting to get better. However, I’m really struggling with resting.

I need to time how long I can do anything before symptoms appear, including neck pain, and then make sure I’m doing that activity for two minutes less than that. I can be in a store for eight minutes, walk for 20 and be on my computer for 10. After that, I need a rest.

It’s taking a lot of energy to remind myself that folding laundry and putting away dishes aren’t really rest times; a rest is when I’m sitting, with my neck supported, not thinking about anything terribly strenuous and not looking at screens. Sunglasses, headphones and crafts are often involved.

While I figure this out, I’m going to take a bit of a break from my newsletter and blog so I can focus more of my mental energy on other online activities, like chatting with other anxious creatives in my new Facebook group (if you want in, just let me know what email is associated with your Facebook account), organizing events in my new city and getting items up on my Etsy shop.

If you’d like to write a guest post for either, let me know! You’ll be hearing from me rather sporadically for the next few months. Current estimations are that I **could** be back to being able to work more than a few hours a week within six to 12 months.

I’m staying at my partner’s home in Montana right now. With the concussion, I can’t get out on my own a whole lot and he’s at work all day. I’m loving my days and the occasional evenings to myself with the hoard of dogs, podcasts and knitting projects.

Alone, it’s easy to get lost in my head and start drowning in anxiety. But I haven’t been.

A number of the cognitive behavioural therapy (CBT) techniques my therapist has given me or that I’ve picked up from the books I’ve been listening to about anxiety have helped a great deal. Still, sometimes that feeling creeps into me.

A couple of years ago, I might have turned that anxiety into anger and lashed out at someone. Or I might have curled up in bed, trying to hide from my feelings and drowning them out with Netflix and other acts of avoidance.

Earlier this week, my chest tightened and my limbs buzzed. Going back to work has been stressful and overwhelming, and doing so from another country with a computer that isn’t my own added to the difficulties.

I thought about what could be making me feel that way. There was no reason. At least, not one that I could pinpoint. I thought about doing an exercise video, but I can’t because of the whiplash. I decided the two cups of caffeinated coffee I’d had that morning were definitely too much and my decision to switch to decaf at home was the right one, but nothing I could do about the caffeine in my system at that point. I considered meditating but knew I was so far gone to be able to reign in my thoughts and instead focused on being more generally mindful as I moved throughout the house.

And as I was walking with a cup of tea and my current knitting project to sit out on the back deck with the pups, I realized that some days I’m going to feel this overwhelming sense of anxiety for no particular reason and that’s okay. Not just a general “It’s okay to feel that way” but, more specifically, I’m okay with having this feeling sometimes.

The anxiety went nowhere, but some of the tension I was holding inside slipped away. Me and my little anxious body sat outside in the sun, listening to my new favourite podcast Kind World and alternating between brushing the dogs and knitting.

I’ve spoken a lot about accepting that I have an anxiety disorder and therefore will always have some unusually high levels of anxiety, sometimes for no particular reason, but I haven’t actually felt that way until now. True acceptance of my body and it’s overreaction to the normal struggles of life is a beautiful thing I hope I can hold onto.

What has your experience with accepting your life circumstances been like for you? Did it help you to move forward in a healthy way or did it feel like giving up?

An unfortunate part of having whiplash and a concussion is that I can only do as much to heal my neck as my brain will allow. While the neck/shoulder/back injury has mostly healed, the muscles are weak and need a lot of work. My physiotherapist put a lot of that on hold while my brain got to a place where it’s ready for that. It’s still not, but she cleared me to do some light yoga.

If you know me, you know I have trouble doing anything “lightly” so of course I took it a bit too much to the extreme and started a 10-day yoga challenge through an app on my phone. I made it to day four before the pain became too great and I realized I was doing more harm than good. Back to the two minutes of pulling on a stretchy band every second day. 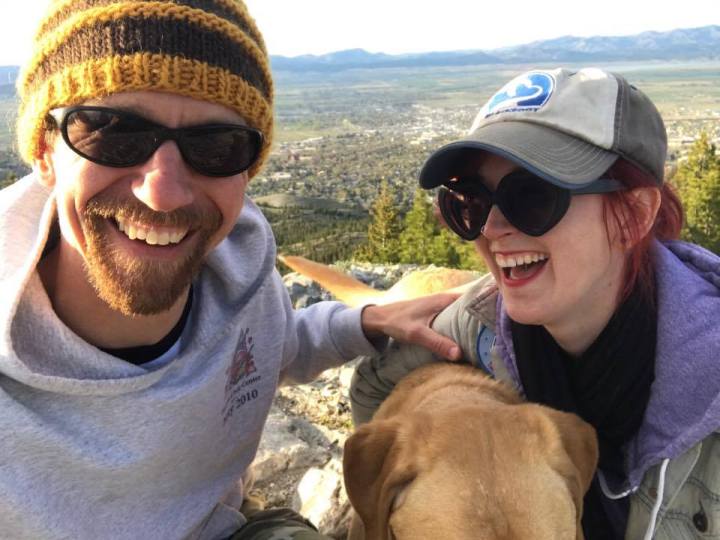 My brain is doing much better. I managed a short hike this week. Although, shortly after this photo was taken I completely concussioned out and Luke had to drive a very ill-looking lady home and make her dinner. Whoops.

I’ve realized that I’ve been pushing myself physically by doing housework and going for walks, and I’ve been pushing my brain to re-adjust to looking at screens for work purposes, but I haven’t actually done much watching of action (plays, movies) or reading. This week, I’ve been putting more focus on trying to do those things as I’ve missed reading a great deal and, being in the states, I have access to American Horror Story on Netflix.

Each day is a frustrating balance of doing my brain exercises, body exercises and re-introducing all the normal activities of my life that I haven’t been able to do—including cooking, shopping and being in moving vehicles for more than a few minutes—without pushing myself so hard that by the end of the day even speaking coherent sentences is difficult. I need to choose what I’m going to push myself on each day and what I’m going to avoid doing or ask someone else to do for me.

A few days in, I’d say my plan of coming out to Montana to relax a bit and stay with an adult who can help take care of me was a great idea and I do think I’ll be coming home feeling much better.

If you know me at all, you know I’m a crier.

The point at a child’s birthday party when the adults sing Happy Birthday, that always gets me. Couples in public, giggling and holding hands. Babies smiling with parents in commercials. Thinking about my grandmother’s beautiful hands. Cute animals.

Really, I cry at everything. When watching movies, my friends often look at me throughout to see if the waterworks have started yet. I wasn’t always like this.

Before I was raped, I rarely cried.

I cried when I broke up with a partner or friend, and when someone at school was mean to me. That was about it.

I didn’t know why I became a crier. It just happened and I decided maybe I’d softened a little bit.

In reality, I was trying to harden, but my emotions were cracking out in other places.

I’ve spent the years since the last time I was raped burying my feelings. Until the last six months, when I got a flashback, I’d drink. When I became so depressed I couldn’t leave my bed, I’d pretend there was no reason behind it other than that sometimes I get sad. I wouldn’t even admit to myself that being raped had any impact on my life, apart from sex.

I didn’t cry about being raped. I rarely acknowledged that it impacted my life, until I had to have that awful talk with a partner who I was beginning to be intimate with. When my thoughts turned to what happened, I’d start telling myself that I was blowing it up in my head, I was exaggerating what happened and it wasn’t that big a deal. It was really my own fault for not standing up for myself more, for not fighting back, for not wondering why that one drink was hitting me way too hard.

I can’t afford therapy, and I don’t think I’m ready for it either. But I’m ready to talk about it a little bit from over here, behind my computer screen.

I didn’t know I needed to hear that it wasn’t my fault and that I’m not the same girl that happened to, but when my ex held my hand and told me those things, I felt relief. Some of the shame and guilt lifted. I realized that it was, and still is, okay to feel sad, hurt, furious, confused and violated. What’s probably not okay is pushing those feelings away, because they’re just going to leak out sometime.

It’s become okay for me to curl up in bed and sob when thinking about what happened. I’ve told myself for the past 10 years that it was never a big deal. Now, I’m going to tell myself that it was a huge fucking deal. As I write this, though, I’m still arguing with myself that it wasn’t that bad. Clearly I have some work to do, but where do I go from here?

Anxiety sucks, I know. There are specific challenges to dealing with it as a feminist, vegan and freelancer. I’m no expert at chilling out and avoiding panic attacks, but I’m learning. Maybe we can do it together?

This week I made the oh so fun and exciting discovery that a lot of my anxiety is coming from trying to cope with the trauma of being raped, without substance abuse or denial. At least I know now?

The episode of Guys We Fucked that I reference, which helped me realize this, is “Suck My Dick… Ma’am?” If you haven’t checked out this podcast yet, I highly recommend it.